With our experienced trekking and climbing guide, we are confident that you will reach the highest trekking peak in Nepal via our 12 days itinerary. We ensure that you have every possibility of successfully climbing short Mera Peak. Thus, you can be proud of your accomplishment in climbing Mera peak and making your dream come true with us.

Mid-September to November(Autumn) and March to May(Spring) is the best season for short Mera peak climbing in Nepal. During this time, there is no snowfall, and the weather is good with a clear sky.

Some people choose to climb Mera Peak in the off-seasons, such as winter and monsoon. Though climbing during these seasons is possible, it is dangerous and difficult.

You can also check out our 18 Days- Mera Peak Climbing itinerary, Lobuche Peak Climbing, and many more other packages.

Duration: 35 min Flight and 5 hours trek
We will begin our trek with the 35 min flight to Lukla, the access point to the Everest Treks. We will have our breakfast at Lukla and rest for some time. Then, we will move towards Chutanga, leaving Lukla behind. Passing through numerous picturesque villages and pine forests, we will reach Chutanga in about 5 hours. We will stay overnight at Chutanga village.

After having our breakfast at Chutanga with the majestic views, we start our hike for today. Moving along the easy path, we will walk the steep uphill reaching Zatrwa La Pass (4610m.|15124ft.). The vistas of Kongde Ri (6187m.|20298ft.), Numbur Himal (6958m.|22828ft.), Karyolung (6511m.|21361ft.), and many more are from the top of Zatrawa La pass. A 2-hour descent from the top takes us to Thuli Kharka, where we can enjoy a downhill walk through yak pastures. While traveling, we may come across some of the yaks.

Go through the upper Hinku valley today. The treeline vanishes as we climb at this height, there are no large localities; instead, there are kharkas or yak grazing grasslands. We stop for refreshments along the route. Charpati Himal, Mera Peak, and Thamserku’s breathtaking vistas are awe-inspiring. We arrive at Kote passing through Tashing Ongma, Mosom Kharka, and Gondishung.

In the sight line of Mera Peak, we go along the Hinku Khola’s ridge. We cross the 200-year-old Lungsumgba Gompa, where Mera Peak and its approach road are carved into the rock. We just need to travel a little distance to reach Thaknak, a summer grazing region with simple cabins and stores.

After departing Thaknak, we go to Dig Kharka along the lateral glacier of Dig Glacier, which provides stunning scenery of Charpate Himal.  It will be incredible to be able to see Mera Peak’s northern face from Khare.

We will have pre-climb training on an acclimatization day before your climb. Utilizing a harness and climbing gear, ascend and descend the rocky terrain. If this is your first ascent of the mountain, the training will be beneficial for you as our knowledgeable climbing guides will impart some useful information and highly helpful advice to ensure a safe ascent. You can pack for the summit push after doing one last gear and equipment check.

We trek to Mera La via a rough, steep trail. The three peaks of Mera Peak: Mera South (6,065 meters), Mera North (6,476 meters), & Mera Central (6,461 meters) can be seen in magnificent detail. Mera Central is the top that we are attempting to climb. We reach Mera Peak high camp after a journey up the Mera Glacier; the hike is on a moderate slope. There hasn’t been any technical climbing up to this point.

It is the day of the expedition. We get up at 2:00 in the morning. The temperature will initially be really low, but as we get farther up the glaciers and onto an odd ridge, it will quickly warm up. The large peaks were bathed in a stunning crimson light when the sun's first rays arrived. As we gently ascend higher into the increasingly thin air, the course remains uncomplicated. Behind the crest, the slope becomes steeper, and the peak is once again visible. If the mountaineering leader feels it is necessary, we may utilize a fixed rope at the base of the last steep summit cone. Only just a few meters separate us from the peak. The mighty Himalayas, including Mt. Everest (8,848.86m), Kangchenjunga (8,586m), Nuptse (7,855m), Makalu (8,463m), Cho-Oyu (8,210m), Lhotse (8,516m), Baruntse (7,129m), and others, are breathtakingly visible from the top. We later return to the high camp, where we relax for a bit before making our way down to Khare.

It's time to return to Kote after crossing the peak off the bucket list and getting back to Khare. We will retrace our path to Kote. However, the Kote is readily reachable within 3 to 4 hours of trekking.  Since most of the path is downhill, walking on downhill trails is simpler and faster. You will notice a drop in elevation as you travel back down the route from Khare to Kote. The majority of your stroll will take place in a lush forest of oaks, pines, and rhododendron trees.

After breakfast, we start the hike to Thuli Kharka. We ascend and descend, passing several Inkhu Khola tributaries. We decide to take the route to our right and keep on moving. After passing a Chorten, we continue on our trail's steep descent. Then we climb to Thuli Kharka, passing another Chorten on the route.

We once more cross the 4,610 meters high Zatrwa La pass after leaving Thuli Kharka. We get to the pass in approximately two hours. We can see a portion of the route we traversed and the scenery is breathtaking and amazing-looking mountains like Numbur Himal, Dudh Kunda, Kongde, and Khumbila. We descend a trail and walk to Lukla. It is our final night on the trek.

We take off early in the morning for Kathmandu. We may rest or buy souvenirs in Kathmandu once we arrive. Today is our opportunity to tour any further parts of Kathmandu. To celebrate the climbers' successful ascent of Mera Peak, a farewell dinner will be held in the evening. 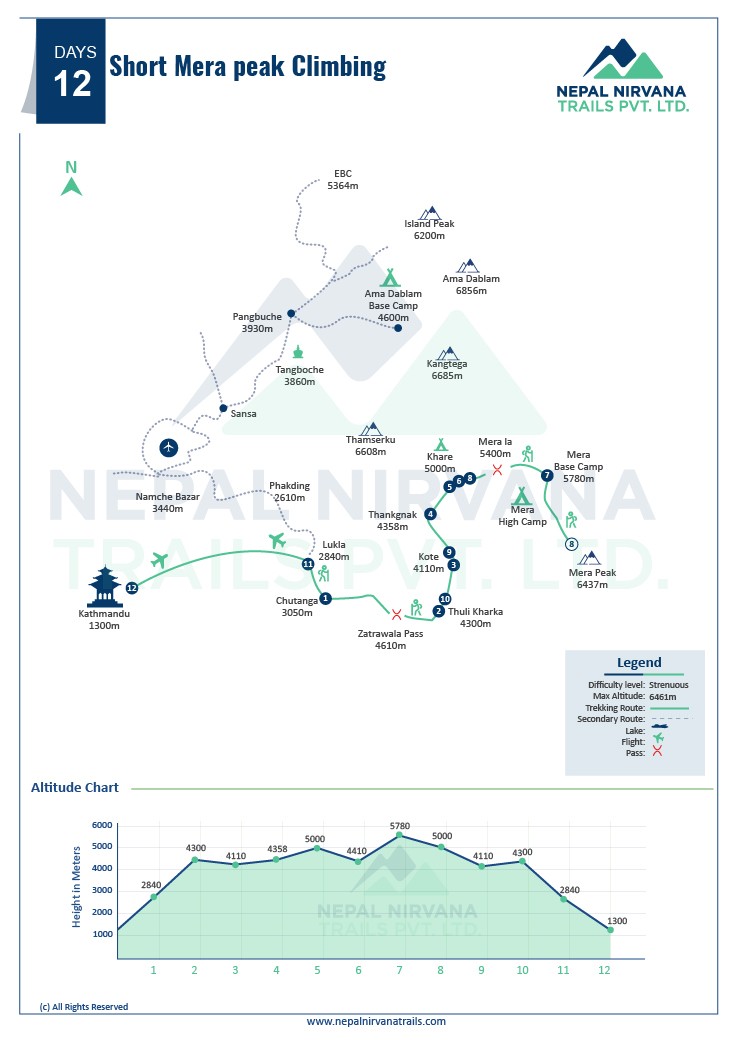